Apologies for neglecting this blog recently. We'll have to scale this down into a weekly thing, as the baseball offseason is my chance to work on my other obligations, namely to my rent collector.

Trey Hillman, it seems, has leveraged his experience in Japan (he was as a god there, after all) into free agents for the Royals, namely relievers Yasuhiko Yabuta and Hiroki Kuroda.

The Yabuta deal is done. The 34-year-old reliever underwent a resurgence of sorts four years ago when he entered the bullpen full-time, as he's posted a 2.80 ERA in 222 appearances since then for Chiba Lotte. As Dick Kaegel reports in the above link, "Yabuta made a splash in the 2006 World Baseball Classic, won by Japan, when he struck out Alex Rodriguez, Derrek Lee and Johnny Damon in a 1 1/3-inning outing against Team USA." Now he's poised to fill Zack Greinke's role as the primary setup man, possibly for Joakim Soria (though I'd like to see Soria in the rotation).

Kuroda is being pursued. Hillman and Dayton Moore are competing with the Diamondbacks and Mariners, who play in a Japanese-friendly market, but there's reason to believe the Royals have a legitimate shot at this guy, who posted a league-best 1.85 ERA in 2005. And that reason, of course, is Hillman.

Hillman remembered that after Kuroda beat his Fighters a couple of years ago, he asked the Carp for permission to talk to the pitcher the next day.

"That's the only time in my five years here that I asked to meet with an opposing Japanese pitcher," Hillman said. "But I told him what a great competitor he was. He just dominated us. I told him how impressed I was with him."

Familiarity breeds friendship, I'd think. If the Royals can get Yabuta, you can consider the Japan-to-Kansas City pipeline officially open.

To commemorate the Yabuta signing -- and in expectation of more like it in the future -- I give you this, my top three Japanese YouTube videos (counting down):

Any culture so willing to denigrate itself for the sake of entertainment is fine by me.

(But as a friend of mine has been fond of saying, "What was in those bombs???")

POSTSCRIPT: From another part of the baseball world, our brethen-in-suffering, the Pirates, have hired a good one to fill the GM role. Check out this quote:

Of course, knowing the difference between VORP and WARP doesn't guarantee success, but it's good to know the Pirates put some brains in their front office.
Posted by The Tao at 8:25 PM 2 comments:

No baseball, no football... no basketball, either. Today's going to be about cooking, a little reading in the down time, drinking and eating. Lots and lots of eating. And not of spaghetti.

And on this side of the rainbow...

Mike Sweeney recently won the Hutch Award, but no one seems to have noticed. It's as if...

Oh, right. (Thanks to the New York Post for the reminder.)

I'm high up on the line, you can get behind me,
But my head's so big you can't sit behind me.
Life of a Don, lights keep glowin',
Comin' in the club wit that fresh shit on, with something crazy on my arm.
Ha ha ha hum. Here's another hit, Barry Bonds. 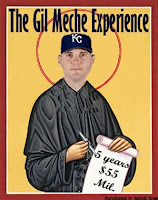 Those guys at the Gil Meche Experience (that artwork is from them) can eat their hearts out, because the Royals announced today that Meche has been selected as the 2007 Royals Pitcher of the Year.

Via Megan Stock of Around the Horn:

Meche, 29, was an American League All-Star in his first season with the Royals. He posted a 9-13 record, but set career highs in starts (34), innings pitched (216), ERA (3.67) and quality starts (23) while equaling his career high with 156 strikeouts. Meche tied for the A.L. lead in starts and finished eighth in innings pitched. His 3.67 ERA was the best by a Royals starting pitcher since Kevin Appier posted a 3.40 ERA in 1997 while his 23 quality starts were the most by a Kansas City hurler since 1993.

The man was brought in to head the rotation, and he did just that. Sure, you can bring up all over again that $11 is too much to pay for a pitcher whose contributions mainly entail ensuring you lost merely 93 games instead of 98, but I'll counter that the passing of days happens one at a time, and that the big picture can't be seen until the details have been filled in. You can't paint with a wide brush in baseball and hope all of a sudden things come together for one magical season. It happens, sure, but you can't count on it. If you do, you get a season like 2003, and then what?

In any case, two other players were honored: Mark Grudzielanek as the Royals Player of the Year and Brian Bannister with the Joe Burke Special Achievement award. You can read all about it in the above link.

POSTSCRIPT: Dayton Moore is interviewed extensively in this article about the Royals' offseason plans. "So I would see us trying to improve our team through free agency, which is a dangerous way to do it, because you end up overpaying," Moore said. "Always have, always will in free agency." Eek. Time to have faith again, people. Another Meche-like free agent coming to KC?

The fan chat we've all been waiting for

Welcome to Dullsville, Mr. Hillman. May we introduce you to our question-asking fans? (Uniform colors? "Extra butterflies"?)

There was at least one interesting bit from yesterday's chat session, though:

GordonBOPS: Welcome to KC! What is your philosophy on balancing playing time for veterans vs. getting young players an opportunity to play?

Hillman (the first part is him talking off-screen, unaware that the Royals intern is typing all this as he's saying it): Hey, we put that one guy out to stud, didn't we? The... the fat one. Yeah, Perez. Can you check on that for me? Oh. He's shooting blanks, eh. Heh. Okay. Well then. So, what was the question? Young players vs. veterans, let's see... We are looking at preparing for a 181-game season and obviously I have to monitor bodies over the course of a long season, but my plan is to put the best capable pieces together every day to beat the opposition. I think a lot of clubs prepare for 162 games, but I don't want to prepare for that. I want to prepare for the maximum amount of games that can be played to raise the expectations. If we don't prepare for that, I believe we enter the season limiting our possibilities.

POSTSCRIPT: Welcome to the blog roll, Minda. "I want to put all my trust in Dayton Moore," she wrote in February. Please do.

You say goodbye, we say hello

The players who filed for free agency last week (some may be re-signed; Odalis Perez, not so likely):

Reggie Sanders
Highlight: Going 3-for-4 in Baltimore to raise his batting average to .500 on April 13.

Jason LaRue
Highlight: Hitting a home run last Mother's Day with a pink bat.
Ed's note: He accumulated 169 total at-bats last season. Take a gander at what his batting average was. Go ahead, it'll be fun.

Andres Blanco
Highlight: I'm not embarrassed to admit I have absolutely no idea what Blanco contributed to the Kansas City Royals organization, nor am I motivated enough to put his name in Google.

David Riske
Highlight: Aug. 24, after Zack Greinke started the game and pitched three scoreless innings, Riske was the last of three Royals relievers to record a hold before Joakim Soria closed down a 2-1 home win vs. Cleveland. Of this group of free agents, Riske might be the only one who gets a raise in the open market, as he posted a 2.45 ERA with 52 strikeouts and 27 walks.

Odalis Perez
Highlight: Didn't gruesomely kill or maim anyone, as far as we know. Well, not literally, anyway.

John Thomson
Highlight: We have not forgotten! (The first sentence of this MLB.com story reads, "Just in case you've forgotten, pitcher John Thomson was on the Royals' roster when the season ended.") Doubtful we'll see this savvy vet pitch in Royals blue ever again. And that's kind of sad. (No, not really.)

But hello to you, Mr. Colby Lewis. He joins the Royals by way of the Fremont Athletics of Oakland, where Billy Beane put him on waivers.

And, potentially, hello to you, too... any names on that list stir your blood?

POSTSCRIPT: Two really interesting reads: 1) Why baseball's revenue sharing system can be improved, via Josh Alper at the FanHouse, and 2) Do baseball managers matter? A question posed by RoyalsNation of Royals Review.