Big hat tip to Baldwin S., who emailed me to say Batting Stance Guy has posted a Royals version of what he does best. BSG, as you may have read in a Bill Simmons article, impersonates batting stances of various well known (and lesser known) Major League Baseball players, and it's, to say the least, amazing.

If you want to know what Frank White, Willie Wilson, Amos Otis, two McCrays, Steve Balboni, et al. (the list goes on for a long time) looked like at the plate, check out the video. I think the guy's got Ken Harvey's strikeout swing down pat. And as Baldwin pointed out, Bo Jackson and George Brett, at the end, are hilarious.
Posted by The Tao at 12:44 PM 2 comments:

What it sounded like inside Capital Gymnasium, and other sounds

A backdated post on what a walk-off grand slam from Yankee Stadium sounds like here (second in the Podomatic queue).

Capital Gymnasium, by the way, is the venue in Beijing where the Chinese women's volleyball team lost to Brazil in the semifinals Thursday night.

From the other side of the world, a shocking upset

This may not mean much to those Stateside, but trust me when we say it's worth sharing:


Nine runs were scored in the 12th inning of yesterday's Olympic baseball game between China and Chinese Taipei, with China winning in dramatic -- and we do mean dramatic -- fashion.

With one out and the bases loaded, China drew a walk to make it 7-5 as the Taiwanese coach, Hung Yi-chung, rested his head on the dugout railing in disbelief. The next batter, Hou Fenglian, went down 0-2 before slapping a single past the first baseman. As the tying run rounded third, the unthinkable happened: Taipei's second baseman mishandled the relay throw, first trying catch it in front of his body, then for some reason moving his glove to his backside as if trying to snag a screwball. The ball bounced away -- even watching multiple replays, we're not sure what happened -- and the runner on first raced around to score without a throw. While China had three errors on the day, this was Taipei's first -- and it cost them the game.

Hou threw his arms up and rushed to join a mob of Chinese players dancing at the plate. No one could quite believe it. The crowd, as you can expect, went wild -- they didn't know what happened either, but the scoreboard showed 8-7 and the home team was jumping up and down on the field. It was time to celebrate.

This story has gotten little to no play here in Beijing, where the mainlanders truly don't care about baseball. In Taiwan, on the other hand, emotions went from unfettered joy to unspeakable disappointment in a matter of minutes as people on the streets watched their team choke away a four-run lead in the bottom of the 12th against Olympic newcomers. Check out these two AP photos, taken from Taiwan before and after: 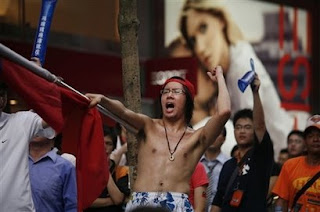 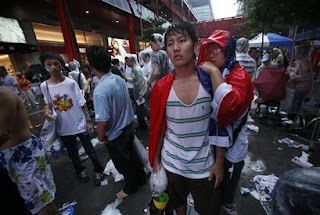 China hasn't been playing baseball for very long, and it doesn't look like it'll be playing much longer once these Games are over, since the sport is getting removed from the Olympic program. This victory -- the first for the China Olympic baseball team -- is just a footnote in the country's quest to overtake the U.S. in the total gold medal count. For the Taiwanese, on the other hand...

The game was so important that Taiwan's baseball chief had offered to resign if his team, officially named "Chinese Taipei" because of political sensitivities with China, lost. Other heads could roll as well, he said ahead of the Olympics.

"It's going to be a big shock, because never in history has Taiwan's team lost to mainland China in international play," said Chao Chien-min, a political science professor at National Chengchi University.

"China doesn't like baseball," Chao said. "For a long time we thought we had an advantage."

That was from a Reuters story. No word on whether the baseball chief resigned, but this loss has completely shaken the island. This is a place that literally shuts down when Chien-Ming Wang pitches, and here they are, losing to their archnemesis.

Very few news articles mentions what actually happened in the game -- not surprising since they probably weren't there, not Reuters (above) and not the Chicago Tribune (actually, they probably were, but still no game details) -- and that's really too bad. You can talk the political ramifications of a China vs. Chinese Taipei matchup all you want, but what it comes down to is this: two teams played a hell of a baseball game, and those who saw it can consider themselves lucky.

A longer video below. In the postgame analysis, one of the studio guys says, "I think in today's game, at the most crucial moment, Chinese Taipei... perhaps the turn of events really rattled them mentally, and that took them from heaven to earth, and they didn't know what to do."

ESPN's Jerry Crasnick did a story on Pirates GM Neal Huntington, who this blog -- among others, including Baseball Prospectus -- seems particularly fond of. The reason is obvious: there are noticeable similarities between Huntington and this blog's namesake, particularly in the situations they inherited: proud, downcast franchises reeling from years of incompetence and bad luck.

Here's an excerpt from Crasnick:

While most mainstream media outlets categorized Pittsburgh as a deadline loser, some bloggers rode to Huntington's defense. The blog "Where have you gone, Andy Van Slyke?'' polled its readers, and 76 percent of the 540 respondents gave Huntington a grade of "A'' or "B'' on his trades.

Pirates diehards who've seen the team drift aimlessly from one half-baked plan to another can at least appreciate the new regime's devotion to a long-term goal. Huntington and club president Frank Coonelly tirelessly preach the gospel of scouting, player development and an increased presence in Latin America, and they're not going to slap on Band-Aids for a day or two of good publicity.

And does this sound familiar? Just substitute "Moss" and "LaRoche" with any number of Dayton Moore's acquisitions...

That's not going to happen, of course. But if Moss turns into a reliable corner outfielder, LaRoche becomes an average third baseman and one of Pittsburgh's new pitchers sticks with the big club, the Pirates will be content with their haul.

The folks over at Bucs Dugout seem pleased, saying the article "accurately describes fan attitudes in Pittsburgh." We're well acquainted with those attitudes over here.

Keep up the good work, Neal. We'll have our eyes on you, and not just to measure our progress by.

POSTSCRIPT: Opening Ceremonies on a scale of 1 to 10... go! Personally, with all the expectations -- and the fact that I watched it in a public setting surrounded by thousands, fighting off mosquitoes and trying to survive the heat -- I'd have to give it a 9. Not perfect, but still... not too shabby. Not at all.
Posted by The Tao at 11:29 PM 1 comment:

"I should have caught it"

True story: if you type something like "Royals Red Sox Maier Gload" into YouTube and click on the video titled, "Jason Bay's Bizarre RBI Double 8/5/08 - Wall Ball," the "related videos" panel will be all Red Sox, most of them with the word "championship" in the title.

Said Maier afterwards: "I should have caught it."

A punch for bears everywhere

About the bears: no, seriously:

Buehrle, [Jim] Thome, Jermaine Dye and A.J. Pierzynski took a bear-hunting trip following Saturday's victory, an excursion set up by Twins broadcaster Dan Gladden on the property of a friend. Buehrle made the only kill of the day, using a bow, but it turned into a memorable moment with Thome right beside him.

Not that we have anything against the red-blooded sport of big game hunting, but... whatever did bears do to you, A.J.?

Have we mentioned how much we dislike the White Sox?
Posted by The Tao at 2:23 AM No comments:

Dayton Moore after the trade deadline

PRELUDE: God I'm late with this, I know... but sometimes I feel like I'm in another world out here in China. There's something called an "Olympics" coming up. Interesting concept. Apparently countries from around the world send "delegations" to a predetermined location every four years or so and compete in all sorts of wacky and fun events. Like, there's one called "pole vault" where people charge with these massive 10-foot poles and then catapult themselves over bars. It reminds me a little of... well, it reminds me of nothing. There is no comparison. Pole vaulting is the pinnacle of human innovation.

The Man speaks in this Dick Kaegel of MLB.com:

"The last four or five days, obviously, we've been in a lot of discussions and a lot of meetings and talked over a lot of different scenarios, but we were never real close to what I would call making a deal."

Other than the blockbusters, there really weren't that many trades this deadline. Teams are holding onto their youngsters.

About Mark Grudzielanek drawing interest from the Dodgers:

"We made it pretty clear we're committed to those guys together. That's not to say that, from time to time, people don't inquire in casual conversation, but it's just not something we're interested in doing unless, of course, it makes perfect sense and you have to do it."

When does Greinke pitch again? Can't wait to see it. Okay, "see" it.

As for Bannister -- his ERA may be higher than last year, but tell me you don't enjoy stuff like this. Is it moral to take Bannister away from Joe Posnanski and the rest of us?

"I thought we accomplished a lot in our discussions and possibly laid the groundwork for further opportunities to improve our team."

Overall though: not as much happening this go-around as last year.