Just realized the KC Star's Jeffrey Flanagan has a blog, and that recently he had the occasion to ask, "Dayton Moore a blogger?"

"Are you kidding?" Moore said, laughing. "You ever see me try to type? It'd take an hour to type one sentence."

Well, that settles that.

Speaking of Moore, though, Sam Mellinger of the better-established Ball Star blog analyzes our heroic GM's transactions. Part 1 here. And as long as we're talking transactions on this, the day the Royals go for win No. 11 out of 12, Rangers Fan had this to say about GMDM's recent acquisition of former Rangers pitcher Robinson Tejeda:

I'm a big fan of that pickup for you guys. I have strong opinions on Tejeda.

We can only guess those strong opinions involve peanut butter and hating Jarrod Saltalamacchia.

Finally, shout it loud: NL is no match for Royals.
Posted by The Tao at 10:24 AM No comments:

We knew this was coming

It's been so noteworthy that Yahoo Sports put the Royals on its main-page sidebar, calling them the "surging" Royals. Eight wins in nine games, 10-3 versus the NL, that'll get you a little bit of attention.

But just a question for Brian Bannister, who hasn't lost since May 22 -- what's up with this quote?

Gas prices should be raised, and the sooner the better. In a nonrenewable-energy dependent society, the more incentives to guzzle less, the better. If you think America's gas prices are "bad," try taking a spin around Europe. Or, for that matter, China, which just decided to raise its gas prices to discourage driving/polluting. And if you need more reasons for raising the gas price, read this Freakonomics blog entry.

POSTSCRIPT: Cardinals suck.
Posted by The Tao at 3:02 PM No comments:

Anyone like me ever get Milton Bradley and Jose Guillen confused sometimes?

Big Donkeys beat me to this, but since I'm not getting any actual baseball games, these are the only sort of stories that pique my interest (other than Eric Hosmer and using Tomko/Yabuta instead of Ramirez/Soria )... via ESPN:

Bradley never reached [Ryan] Lefebvre, although he was within about 20 feet of him in the TV booth before being led back down to the clubhouse.

"There was no incident," Daniels said.

Upon returning to the clubhouse, Bradley screamed at teammates and broke down in tears.

"I'm tired of people bringing me down," Bradley said. "It wears on you. I love you guys, all you guys. I'm strong, but I'm not that strong. All I want to do is play baseball and make a better life for my kid than I had."

What a weird incident. Can you imagine if you were the radio announcers in that small booth listening to the footsteps (and curses) of an angry, angry man bounding up the stairs? I'm not sure what Lefebvre said, but give him credit: he didn't back off.

"We weren't tearing up Milton Bradley. I told [Washington and Daniels] this wasn't a Milton Bradley rip session, but just based on the pictures we've seen in this series of him walking to the dugout all the way to right field, dropping his bat, making gestures to the fans in right field and above the dugout and taunting them. He's the only person in baseball I know that does that type of stuff."

Some say the White Sox and Mariners reacted well to their manager's respective blow-ups. Maybe the Royals can use this somehow? Is that too much to ask from a radio announcer?

POSTSCRIPT: In my desperate attempt to get Rangers Fan to guest post, I got him to say this: "We care now! We're decent. How about how your bullpen CHOKED. That's the storyline I take from that game." You know which game.
Posted by The Tao at 11:48 AM 2 comments:

Guess who's a Royals fan?

From an interview posted on ESPN The Magazine's website:

You bartended in Oklahoma, were born in Texas, raised in Missouri and now you're in L.A. Who do you cheer for?
I spent a majority of my life in Kansas City, so I am a Chiefs and Royals guy. I used to work for the Royals for like five years in the suites department and in the stadium club restaurant. The Royals allowed me to make some money, which was nice. With the Chiefs, you can't live in Kansas City and not like the Chiefs. To go catch a game at Arrowhead is a pretty great experience. I haven't had the chance to go to games anywhere else, but, from what I'm told, I don't really need to.

You haven't been to a game anywhere but K.C.?
Well, I've been to a couple games out here in L.A. with the Dodgers. And actually, I think the Royals just traded Angel Berroa to the Dodgers.

Think it's a good trade?
You know it depends. At the end of the day I certainly enjoyed Berroa when he played for the Royals. He won the Rookie of the Year award in '04 or '03 [Ed.'s Note: He was ROY in 2003, beating out the likes of Hideki Matsui and Mark Teixeira.] I thought he was a great contributor to the Royals while he was there.

What's the craziest thing that ever happened at Royal's stadium when you were there?
Besides them having a winning record that one season? The craziest thing for me was getting to throw the first pitch. I was joking around all day saying, "I'm gonna shake 'em up and throw a curve ball." Then I get in the dugout and a couple of the players are like, "Aw man, you got to short-hop him." Brett Tomko was the guy who was catching. We're getting ready to go out on to the field and Tomko tells me, "Hey, just so you know, there was a celebrity that came through and he threw out the first pitch and he short-hopped it and they booed him off the field." And so then I started freaking out, I don't want to get booed of the field! So I just threw a four-seam fastball and barely made it there. I almost threw it in the dirt and then Brett Tomko comes up to me and goes, "Great slider." It wasn't a slider, but I didn't have the heart to tell him.

Watching the Royals from Beijing

Kro's Nest is one of the few decent pizza places in Beijing, nestled next to an Outback Steakhouse next to the Beijing Workers' Stadium.

It was there that I caught two Mike Aviles doubles and watched Kyle Davies and the Royals beat the Yankees 2-1. 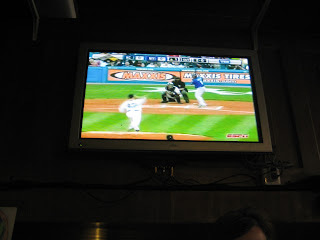 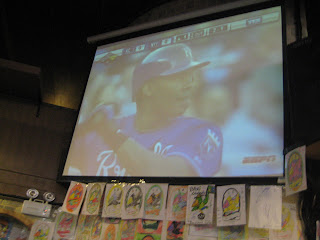 No matter how far you get from home, it's nice to carry a part of home with you. Even on tape delay.
Posted by The Tao at 2:59 AM No comments: