The Royals have won the World Series 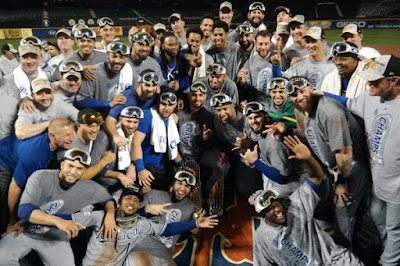 This will likely be the last post that appears on this blog, which I created in 2007 just before the start of the Royals' first full season with Dayton Moore as GM. I had to stop regular postings after moving to China, but I've always followed the team from afar, from arguing the Myers-Shields trade (can we call it the Davis-Odorizzi trade now?) to whispering in the spring of 2013 about how good that team could be.

But this good? No. Not ever had I imagined that, because the 2015 Royals are literally unimaginable. If I were blogging regularly, I'm not sure I could conjure enough words to describe this team game after game, after every new inventive way of winning. Maybe I'll just keep it simple then (something I wish this current version of me could go back in time to tell former me): the Kansas City Royals are World Series champions. The city is about to shut down for a championship parade, and I wish I were there.

I want to leave you with a question. But first, I need to set up that question with a bit of context. You already know all that follows, but let's call this for posterity's sake --

That Cy Young winner? Knocked around for 3 earned runs in one inning in a series-clinching game. That invincible team? Beat them so bad in Game 4 that they called on a position player to pitch, the first time that's happened since Babe Ruth. That closer who hadn't blown a save since July 30? He blew THREE saves in one week against the Royals.

They won that do-or-die Game 4 in Houston after trailing by four runs with six outs to go. (However many years later, that victory will not seem less miraculous.) They won in 14 innings, tied for longest game in World Series history by innings. They won in 12 innings after scoring five runs in the top of the 12th, the most ever in an extra-inning World Series game.

They won when a tie-breaking run was scored from FIRST BASE on a SINGLE. One year after the tying run was stranded 90 feet away in Game 7 of the World Series, they won after a 90-feet mad dash that was equal parts daring and outlandish. They won when a player who had not recorded an at-bat all playoffs -- whose last RBI came 41 days prior -- drove in the game-winner.

Little League coaches will tell their players to have fun like the Royals. Baseball executives will emulate Dayton Moore's team-building philosophy. Baseball analysts will conduct exhaustive studies on the flaws of their projection systems. National baseball writers will run out of words. And a generation of fans in Kansas City will never forget the names Gordon, Davis, Hosmer, Cain, Escobar, Perez, Volquez, Zobrist, Hochevar, Jirschele, Kuntz, Yost...

Is it possible that for the rest of our baseball-rooting lives, however hard we root, it will never get better than this past month when we rooted for THIS team?