8:13 pm: Cain is able. And here I thought I'd have to sweat through seven innings to see the game reset. This is much preferable. Deficit gone...

8:15 pm: ...and now the lead! which means we're three innings away from Herrera-Davis-Holland. I've always relished, from an observer's point of view, the emotional ebb and flow of a baseball game. One minute you're clutching the physical manifestation of your heart in the form of a pillow, deathly hopeful, and the next you're pumping your arms as adrenaline surges and your body is like, "Dude, you're not even in a fight." And then -- is it too early to say? -- the game ends.

Note from the TBS broadcast: "Salvador Perez is the Yadier Molina of the American League."

9:42 pm: As easy and tempting as it might be, you can't really put this on Ned Yost. James Shields might have pulled himself out of the jam, but who's to say? He didn't look sharp in the first two innings, and those baserunners in the 6th were solely his responsibility. Kelvin Herrara could have done better out of the pen, but he wasn't exactly mowing down Derek Norris and Coco Crisp. One has to believe Yordano Ventura was told beforehand to be ready to come in out of relief, and that he relished the opportunity. Sometimes athletes simply don't perform as well as we -- or they -- hope. It happens.

Clutch something, everyone. Bottom of the ninth.
— Anthony Tao (@anthonytao) October 1, 2014

Lucky to be watching this one. Whatever happens...

Well, that happened. Been dropping thoughts on Twitter. I'll end the post with these, and then go celebrate. As should you. We all deserve it.

Ridiculous. There are A's fans in Kauffman laughing about it all. Whatever happens, this is probably already best baseball gm I've ever seen

Two thoughts: 1) I like Oakland, Billy Beane. Always have. Tempers my joy 2) This gm was microcosm of season for both teams, in so many ways

So, Salvador Perez talked to his bat before that pitch, promised to never sacrifice another chicken if he didnt get something to hit, right?

Since the sixth inning of this game two hours ago, everything has been gravy. Now onto dessert. Maybe this nightcap: pic.twitter.com/d5pzdK7YOt

I'll be watching the Royals tomorrow from...

...Beijing. Where will you be watching?

Wherever it is, swing by for a live-blog if you'd like. Advance warning: it may be very onomatopoetic and recitative. Let's go Royals! 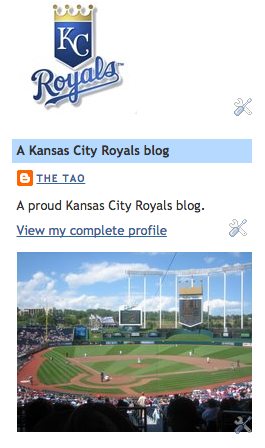