This post is in honor of Cranston's bachelorhood, which left him at approximately 11:56 a.m. Eastern Standard Time on the Saturday of April the 5th, two-thousand and eight in the Year of our Lord, driven out by the lovely Theresa K. 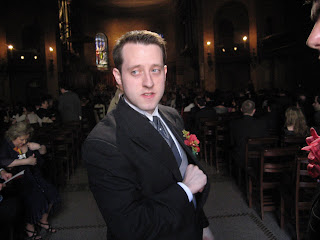 Part 1 of this AL Central Preview roundtable here. Your participants:

Please slander a fellow fan of another AL Central team.

Twins: The Indians now play at Progressive Field. Cleveland, progressive? The only thing progressive about Cleveland is they are the first city to have a river that sets on fire, hey-o!

I want to slander Dees some more, but I just feel too bad about it. I guess I'll do the right thing, and since I'm in print, I'll LIBEL him. That's right Tao, this engineer done learned to talk good, y'heard?

After the blown playoff series last year and the inevitable departure of Carston Charles to the Evil Empire, I think Dees and other C-town fans are a little on edge about their beloved hometown. Throw in the fact that the LeBrons are going out in the first round this year combined with Brady Quinn about to take over as the Dawg Pound's head bitch, and Cleveland sports is at a crossroads. Do they take the next step to greatness, ending almost 50 years of heartache? Or do they again get squashed mercilessly, Craig Ehlo/Jose Mesa style? Don't despair just yet, Mrs. Sizemore, there's always Loyola Academy Girls' Lacrosse. Goo hustle, Scooter.

White Sox: Were there any Tigers fans before 2006? And at least our manager isn't a worn-out, chain-smoking munchkin.

Indians: No nickname for a ballpark fits their fan base better than The Cell. From father-son d-bags who roll onto the field beating down umpires to the 7-year-old child who told me two years to "go to Sears Tower and jump off because the Indians suck," The Cell is the future home for about 1/2 of this team's dirty fan base.

Tigers: Twins fans enjoy sloppy seconds. Look at how they welcome Torii Hunter... they don't care that he left them for a richer guy with a nicer house, they still cheered him like silly, smitten, loser lovers. Also, this is a city that saw Randy Moss, Kevin Garnett and David Ortiz waltz into history on other teams. Not much backbone among those 10,000 lakes.

Tom - you're a master at heckling, a skill honed during your playing days with the HorrorZontals, KU's legendary Ultimate Frisbee team. Say something particularly scathing about a fellow fan of the Twins, White Sox, Indians or Tigers.

Royals: Twins: Following the Santana trade, your rotation is as shaky as your fine city's bridges.

Give an example of East Coast bias as it relates to one of the AL Central teams.

Twins: The East Coast bias where everyone's picking the Yankees and Red Sox this year, completely ignoring the addition of Jose Guillen to the Royals. Trey Hillman, bitch!

Indians: I love how Sean Casey is basically working in obscurity for years while in Pittsburgh, Cincinnati and Detroit. Yet, now that he is a backup on the Red Sox, his inability to travel to Japan is front page news on ESPN.com.

The Joba Rules! Every team with great young pitchers does this stuff. The Tigers did it with Zumaya. The Indians did it a little bit last year with Rafael Perez. But only with the Yankees guy do we get the RULES!

Tigers: When the Tigers defeated the Yankees in 2006, the Mets finished off their sweep of the Dodgers on the same day. This, of course, limited the press coverage of the Tigers' win in New York -- bastards.

Royals: One Royals game is on ESPN. Against the Red Sox. Turns out there are only three teams in the MLB. The New York teams and the Red Sox.

Kinsella - as mentioned earlier, your city has seen the departure of David Ortiz, Randy Moss and Kevin Garnett to Boston. What should Boston give you in return?

Twins: The head of Larry Bird on a platter. Or let's make a trade, we get Theo Epstein, you get Kevin McHale.

Troy - what did Tom Gamboa, former Royals first base coach, do to deserve the beating he received at the hands of your fans?

White Sox: He ignored the genius of Tony Muser one too many times.

Dees - your team once had a player who escaped a shooting unharmed when the stray bullet lodged in his hooker boots, which he was wearing as part of a cheerleader's uniform. Fuck the hell?

Indians: The Indians definitely have a history of weird people, but these two take the cake for me:

Kyle Denney did escape from a random bullet thanks to the cheerleader boots he was wearing in 2004… I bet he wishes he could have worn those magic go-go boots on his head during a minor league start in 2005 when a line drive fractured his skull. What’s worse, a bullet in the leg or a line drive in the head? I’m picking bullet.

Tigers: I have far more affinity for the south of China, but given my druthers, I'd still take Eldrick Woods.

Tom - the Royals are probably the best organization in baseball, from the front office to the fan base. Elaborate.

Royals: No one represents the Midwest like the Royals. Look for them to win 162 games in a row.

How many games will your favorite team lose to the Royals this year?

White Sox: Every game that Hideo Nomo comes in and shuts down. But seriously, eight or nine times, the two teams are pretty evenly matched.

Indians: The Royals always play the Tribe tough. Last year, it was 11-7 Indians. I’m looking for 12-6 Tribe this year.

How many games will the Twins, White Sox, Indians and Tigers lose to the Royals this year, respectively?

When will your team contend again for the postseason?

White Sox: When they stop overpaying for setup relievers and .260-hitting outfielders.

Indians: The Tribe will contend again this year but will just miss out. Last year was our chance, and we missed it.

Tigers: Every year from hence forth.

Royals: 2008, when the Royals move Teahen to 1st and Gathright to left. Gathright steals 150 bases and the Royals win going away.

What is your hard drug of choice, and what are you feelings on the War on Drugs?

Indians: While not into the actual drugs, my drug used to be gambling… oh man, what a rush. But after an awful waste of cash last week in Vegas, I’m going cold turkey. I’ll probably just switch to meth now. It seems like the cool thing to do.

The War on Drugs, why? Just make things legal and then tax the shit out of them. We’re already doing that with cigarettes, why couldn’t we do it with marijuana at least? With the way our economy is right now, it couldn’t hurt. [Ed.'s note: Nope, too reasonable.]

Tigers: My hard drug of choice is Julio Franco. The War on Drugs is fine with me -- after all, what else are the veterans going to do when they get back from Iraq than try to destroy every illegal substance they can to forget the carnage.

Royals: I like LSD because I trust my government to really cook up some good shit. In other news, I am all for a mission that involves pouring a bunch of money into something for no return.

And finally, please give us a glimpse of a day in your life -- or speculate what life would be like -- if Al Gore had not invented the Internet.

Twins: ManBearPig would run wild. [Ed's note: This isn't quite what K is referring to, but it's damn brilliant in the sort of twisted, shocking, horrifying, this-is-what-we-expect-from-our-nation's-youth way.]

White Sox: I'd actually have social skills and be able to have face-to-face conversations with people. I'd also be a lot more tan because I would actually leave my house once in a while.

Indians: As a teacher, you can probably guess how my usual school day routine is. But right now it’s spring break, so I think you should get a glimpse of the good life:

10 AM-Wake up
10-11 AM: The Price is Right. God, do I miss Bob Barker? I do get to watch Cleveland’s finest, Drew Carey, host.
11-11:30 AM: Dana Jacobsen is telling Tiger Woods to choose his words better on the golf course. Wow, the irony is slapping me in the face.
11:30-1:00 PM: Tired again, nap.
1:00-2:00 PM: Scrubs time, I’ve been told that I teach like Dr. Cox. Probably the nicest thing that’s ever been said to me.
2:00-4:00 PM: The O.C. on SoapNet. It was Season 3 episodes, so not the best. Although I did get to see Jonny fall off the cliff and die today, kind of a nice metaphor for the O.C. during Season 3.
4:00-5:30 PM: Watched Just Friends for the 8th time on HBO this week. Ryan Reynolds is not a good actor, but his movies suck me in.
5:30-10:00 PM: Some sports program, terribly corny sitcom or Hannah Montana
Rest of evening: a combination of Stephen Colbert, Oprah reruns and Game Show Network. I love Family Feud more than any man should.

America’s youth are in very capable hands, if I must say so.

Tigers: I generally spend the day in my mother's basement -- I call her mom. I eat a lot of cereal, and I think Tool is awesome. I used to be a barista until I was no longer able to get up for the shop's daily coffee rush hour from 8-9. I have 14 fantasy baseball leagues and I do separate projections for each. Also, Baseball Prospectus has really fallen off from what it was before -- so many of those dudes have left. Finally, I also like Hot Pockets.

Actually, one more. What would you like your last words to be? In your life, I mean.

Or, in the words of Steve Goodman:

Give me a doubleheader funeral in Wrigley Field
On some sunny weekend day (no lights)
Have the organ play the "National Anthem"...
[Ed's note: Kinsella goes on to quote 19 more lines from this song, which we won't reprint here. Read it for yourself if you'd like.]

White Sox: N/A. I am immortal.

Indians: "Thank God, the (fill in any Cleveland professional team) finally won it all." Or some really disparaging, hurtful comment to my children that would haunt them for years.

Thanks for participating, guys. Based on your answers, the likely order of finish in the division probably will be:

POSTSCRIPT: The third best thing about the wedding reception -- behind the lethal open bar that opened at 1 p.m. (corollary to lethal open bar: open dancing) and the old friends in town -- was the baseball-themed guest tables. I got the Royals table (or course) and sat with an Indians fan, at least one Cubs fan, a Rockies fan and at least one non-baseball fan. The mini-albums passed out to all of us at this table featured pictures of the likes of Dan Quisenberry, Bret Saberhagen and Willie Wilson (that was mine). All I have to say is: I can't wait for the 2008 powder blues. Hopefully they're nearly as sweet as the 1979 version.