Catching up, kind of

In the context of recent Royals events, my last two posts could not have been more off the mark. I understand this, trust me. They were deliberately -- and I'm just throwing out a few words here -- mild-tempered, light-hearted, tongue-in-cheek, non-Royals-related. On the other hand, as far as I can tell, the prevailing attitude among bloggers and commentators falls somewhere between exasperation and resignation, or, on a slightly different axis, rage and despair. The fallout to the Yuniesky Betancourt trade has been damn near nuclear, and let's just say someone ought to check if Rany's still alive after his upcoming visit to the K. (His blog's tagline: "July 10th, 2009. The day the music died.")

I had no idea, however, the extent of the animosity towards the Royals' front office until I spent a couple hours today trolling the blogosphere (with a VPN, of course, as Blogger's blocked in China). Just click on any random link in my blogroll and you'll see (Royals Review has been leading the charge, e.g., here, here and here). The line of disgust and antipathy and -- could it really be? -- hatred has been sunk so deep that even some blog readers have begun to cringe and ask something to the effect of, "Eek... really?"

A sampling of the comments to Rany's 4,254-word renunciation of his fanhood:

Travis: Bull shit. I don't buy you're quiting on the Royals. As much as I like your blog, I'm not begging you to keep writing it. We don't need diehards giving up whenever they get pissed. It's one thing to bitch about the Royals moves, it's another to quit on your team for good. Calm down, have a shot of whiskey, and lets hope for some more moves at the deadline.

jason y: its a sad day to be a royals fan....but how is that different from any other day? when you're at the bottom the only place to go is up. dont lose faith.

(This one is kind of awesome) Keith: Rany, I kept checking your blog Friday night. I thought perhaps you pulled the plug on the whole thing. As an almost casual fan I was bothered by the trade immediately. If I've heard of Cortes then he must be valuable. This is clearly a lost season and I thought it was time to unload contracts and pick up players for the future. I've quit the Chiefs but the Royals are still meaningful. I think it helps not to care too much. Family and friends are whats really important.

Scott: And I also agree with Travis. You can't just give up. It doesn't work that way. I'm 27 years old (Betancourt's age! And I'm not nearly near my peak, thank you very much) and have never known the Royals to be good. Ever. But, here I sit, just waiting for what will definitely be one of the greatest moments of my life when the Royals finally "find a nut."

stpat: ...All I can say is stick with them, if for no other reason than to give us (the Fans) a legit voice.

Ryan: I don't really see the big deal. It's not like they traded Hosmer or Aaron Crow or someone like that. Also, unlike the Jacobs deal, it's not like they are blocking someone better on the farm with this deal either. I really don't see it having that much of a negative impact. Maybe it costs Glass some money if he continues to tank but I don't really care about that. Someone other that TPJ has got to play short and I don't see any other options out there.

And another thing, I'm sick of hearing people talk about I'm not going to anymore games, I'm done with this team, I'm not wearing anymore Royals gear.......good. I'm with Travis and Scott. We don't need you around making ridiculous claims about your loyalty. If you leave, stay gone. I don't want to see you back when the tide turns. And it will turn.....

Matt Berger: Rany im 20 years old, ive never really seen a winning Royals season 2003 doesn't really count. I want to give up, I want to stop caring but I can't and I haven't so you can't either. Might I suggest you keep being critical and hope you're comments reach ears who belong to someone in position to make decisions. You have a bully pulpit keep using it. I look forward to meeting you Saturday.

So on and so forth.

I admit I did not read all 134 comments (I will never understand what would ever motivate someone, like ejfunk, to write a near-500-word response to a blog post; I mean that in the best way possible). I will also admit that despite the many affirmations of loyalty to the Kansas City Royals, I was still dismayed, or unconvinced of one thing or another. What that thing is exactly I can't or don't want to articulate. I feel as if the world's blown up and I was on the moon.

Here's the thing: when you live somewhere that's removed from baseball, you lose touch with the rhythm of the season. You forget if those 1-0 losses were pitched by Brian Bannister or Zack Greinke, or if Luke Hochevar's still in the rotation, or why the name "Bruce Chen" is in the box score. I check the scores every morning and feel a distinct pang of disappointment when I see the Royals have lost, an unmistakable pick-me-up, like the first sip of fresh-brewed coffee (in terrifically short supply here), when they've won, but still -- you lose perspective. You find yourself clicking on "standings" every other week, something you shouldn't need to if you're watching Baseball Tonight every other day.

And it is here that I admit that until today, when I had the good fortune to read the blogosphere's reactions, the Betancourt trade didn't bother me all that much. I didn't think much of it. I read Bob Dutton's article and felt it disingenuous to some degree, but I really didn't think it worth my time to fuss over yet another trade of a couple minor leaguers for a middling position player.

Those who run counter to the zeitgeist risk inducing something much worse than irrelevance, a pit where this blog has been fast descending (damn you, Great Firewall of China) -- disdain. I don't want that. Those who sigh and curse, pound their fists and wring their hands while following this maddening yet beautiful, wonderfully intricate and fascinating game deserve better than yet another loathsome Royals commentator.

In other words, I'm not entirely sure whether In Dayton We Trust has a place in this current landscape. We're taking a vacation until the steam evaporates off Royals Land.

I won't go so far as to quote Keith -- "Family and friends are what's really important" -- but right now I am going to slip on my flip-flops, walk to the convenience store and buy an ice cream cone.
Posted by The Tao at 10:14 PM 5 comments:

JAYSON STARK: Yeah, not to suggest it's been a while since the American League lost an All-Star Game or anything, but after the AL had ripped yet another All-Star triumph off its relentless July assembly line Tuesday night, we couldn't find a single member of this year's AL All-Stars who could correctly answer the following straightforward trivia question:

Do you even remember the last time the National League won an All-Star Game?

On and on it went, nobody quite recalling, until Royals pitcher Zack Greinke decided to get sneaky -- and turn the tables on us by asking US a question.

"The last time they won one," he wondered, "who played in it?"

Hmmm. We hadn't actually done the research on THAT question yet. So we guessed -- incorrectly, by the way -- that it was at least possible that Derek Jeter had.

And lest you forget, Greinke is more or less Mr. Daytona Beach USA.

POSTSCRIPT: Apologies to these Royals blogs, which should've been on my blogroll long before now: Everything Royals, Tangled Up in (Royal) Blue and Royals Primacy. And if you're wondering, yes, I recently learned about at least two of the above due to the Yuniesky Betancourt trade. See, there is something positive to come out of it, and we haven't even given it time to play out yet.
Posted by The Tao at 10:08 AM 1 comment:

"If I had a good curveball I wouldn't be president"

From Jeff Caple, ESPN -- Ichiro's come a long way since "two rats screwing in a wool sock," hasn't he?

"My idea, when I saw him, was to say, 'What's up?' to him,'' Ichiro said through the Mariners team interpreter. "But I got nervous. You know, he has that kind of aura about him. So I got nervous and I didn't say that to him. I was a little disappointed about that. But I realized after seeing him today that presidents wear jeans, too. So my hope is that our skipper, Don Wakamatsu, was watching that and we can wear jeans on our flights as well.''

And the NL fails yet again. 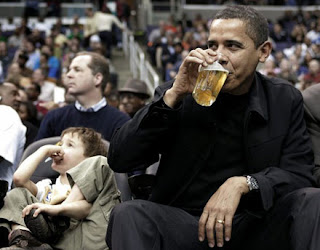 Because this is pretty damn cool.
Posted by The Tao at 8:48 AM 1 comment: