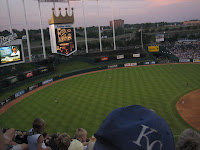 Those of you who follow this blog have probably noticed my affinity for Royals previews, which I've been posting for two reasons: 1) as informed and curious fans, I feel we might be interested in what others think so we may better understand ourselves (and it happens that others know more than we suspect); and 2) because half the fun of sports lies in the anticipation of an event, just as half the thrill of theatergoing lies in the post-show discussion: art as conversation about art.

And so, the twittering continues, on blogs, talk radio, magazines and newspapers, SportsCenter...

Yet you would think that those who work in sports might understand, better than most, that the allure of the games we watch rests not in what we can predict but in what we might never. The latter statement is especially true of baseball. Replay September 1964 a dozen times and the fifth-place Cardinals never catch the Reds, the Phillies never squander a six-game lead with 12 to play. Spot the 2004 Yankees another three-games-to-zip series lead and Mariano Rivera doesn't blow the save, the Red Sox don't win Game 7 in New York. A hundred first pitches to a gimpy Kirk Gibson and he'll never again -- not a chance in hell -- send the ball screaming into the delirious night. 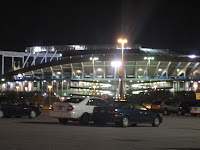 But one by one, my New York colleagues in sports journalism blink at me when I tell them the Royals will win 78 games. I don't dare mention the hope I hold for the postseason. They're too stunned to shake their heads, preferring instead to look away as if to avert the spectacle of me abandoning the last vestiges of my sportswriting credibility.

"They could lose 70 games within their division!" exclaims a deputy research editor, not at all chary about his gross exaggeration.

"Who's their ace, Gil Meche?" says another, thinking he's making a joke.

"78 games," I say. Others nod. The polite ones feint a moment of pondering. My roommate, a Red Sox fan who lives for baseball, said he'd take that bet and felt so bad for it that he agreed to another: whether the Cubs would win 83 (he took the no). Most people, however, simply dismiss my remark, probably figuring it the product of a diseased baseball mind attenuated by years of hard, wearisome losing.

They've all missed the point. Every last one of them.

*
Then they told him, "Now draw some out and take it to the master of the banquet." They did so, and the master of the banquet tasted the water that had been turned into wine. He did not realize where it had come from, though the servants who had drawn the water knew. Then he called the bridegroom aside and said, "Everyone brings out the choice wine first and then the cheaper wine after the guests have had too much to drink; but you have saved the best till now." --John 2:8-10 (the first miracle)
The beginning of the gospel about Dayton Moore, purveyor of hope and resurrection.

In the settling sun on a coarse cornfield stippled with pests and cuckolded by propagules of festering lichens and black pimpernel, the Gatekeeper spied his approach. When he neared they nodded in greeting like old familiars, though they had never met. The Gatekeeper, all flakes and angled bones, saw the man and discerned in him an evocation of another time, another space. He bore a message, the Gatekeeper knew, and thus the Keeper said, Declare yourself, for you trespass and through me you shall not enter into the city of Woe and eternal pain. He raised his head and behind him in the cloudy spires suddenly rose a stadium backlit by the fire of a waning source.

Dayton said, Dear friend of the dusk and of time, I am Dayton of the Moores, apostle of gods unseen and purveyor of hope. I am dignitary to the speechless, prophet to the faithless, guide to the banished, anchor to wanderlust. I shall pass with my best foot forward, my greatest offering first for greater offerings later and last.

The Gatekeeper inhaled and their eyes locked, and the Gatekeeper said, What gift do you bear? And Dayton opened his knapsack and said, My kindling is your gift, and from within he withdrew a shimmering sky blue light like an orb that glowed deep and transformative in the assailing dark. The Gatekeeper swayed and took a step back. He saw this and knew it was true, yet he wavered.

He said, I will hide my face and see what its end will be, for they are a perverse authority that commands me.

Dayton considered this, and he said, I understand the truth that has infested you, but it is not my truth and it is not the truth of the future. Believe in this and the chains of the past will slip from you, and the past will flee from you.

The Gatekeeper waited for more but no more came, and so he demanded to see proof fortified by logic and said only then should he pass, for bold were his ways but many bold men have died and people do not speak the names of the brash dead.

Then Dayton smiled and waved his hand, and fixed were his eyes on the distant sky and then the distant flat and then the stadium, and here the Gatekeeper strained his mottled neck and turned to peer upon the aureoles descending from the heavens and the weeds that rose off the ground like whispering wisps and shimmered in the light of the aureoles and illuminated the field that glowed golden suddenly like an impossible dream.

Slowly the aureoles of white light fell on the stadium and compounded till all could be seen, the gnats dancing among the gallivanting motes and the ears of corn in the surrounding countryside and glory of times past and the manifestation of cheers that grew till it seemed omnipresent, each atom infused with sound itself, beaming waveless and reckless through the world entire. And here the Gatekeeper raised a hand to shield his etiolated eyes from this encroaching phosphorescence. Echoes and flashes, phantasmagorias and verisimilitudes.

And then it faded, quickly, the coruscating elements withdrawn into holes in the heavens and the wisps descended.

The eyes of the Gatekeeper were wet with fear. He made an attempt at speech but the sound caught in his throat. He convulsed. Impoverished I was, he spoke, but now I am nourished. Blind I was, but now I see the light.

Dayton did not smile here but waited, and waited, and then the Gatekeeper stepped aside, peering still at that monolith that stood silent witness to what would be, and he let him pass. 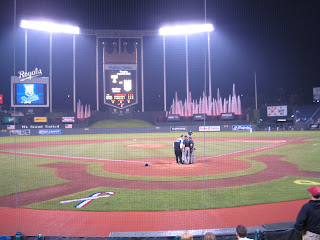 1. I would like to explain baseball to
Kurt Schwitters, Merz-poet and artist,
whose work was clothing, office, bedroom,
and carapace, who glued together
assemblages of ordinary
things -- cigarette wrappers, bus tickets,
ads -- first to make collage, and then to
inhabit. I would like to linger
with Schwitters in the Fenway bleachers,

2. explaining baseball. ...
--Donald Hall, "Baseball"
It is not their fault, these prognosticators who persevere in their absent pursuit. It is, after all, what makes sports go round, this endless, exhilarating or tedious dissection of what is, in plain reality, a simple child's game involving the simplest elements. We complicate it by our choosing because it proves we are of a high order to take pleasure from our conclusions and analyses. Yet we watch baseball too because of its elegance and obedience to an ancient contour, shaped many generations past. We watch with hope, a primal element that is at the core of the game, for without hope the cylindrical bat never meets the small smoking orb, the climax of the rally always lives down the build-up, the innings drag on like an interminable bore. Without hope we are past surprise, and thus dwell with banality and docile aplomb.

78 wins or however many is not the point. I don't know how many the Royals will win and, frankly, it's only a number anyway. But I do know that on this, the day of season's opening, no possibility lies outside the realm of plausibility, and to realize this is to realize the truth in this game's beauty, all ye need to know; to understand the poetic waxing of Walt Whitman or Marianne Moore; to avoid taking the plunge off George Brett Bridge under the K's steady gaze.

On this, the second day in April, the 39th Opening Day in Royals history, I am reminded of words from two poets, Chaucer and Hall. "When in April the sweet showers fall, / and pierce the drought of March to the root... to hear 'Play ball,' to allow the game's dance to receive our beings into its rhythms for two hours or three and then, in late afternoon, to release us again into the rubble of random streets..." no numbers, no statistics... spring is no time for those.

So today, in the few remaining hours before Gil Meche's first pitch, take some time to relive Opening Days of yore; go reread owner David Glass's comments about finishing .500; believe, as he does, that karma is about to rear its head. Analysis can wait.
***
ODDS AND ENDS
Posted by The Tao at 12:02 PM