The Mecca of and that is Yankee Stadium (the narrative) 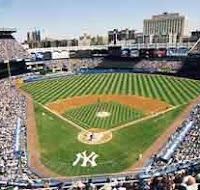 The chant is less a chant than an occult incantation to summon the spirits of bleacher ghosts past to this modern game, which has changed through the years but, generally speaking, has aged well. There are few holdovers from those black and white years -- the Golden Age, as the wistful have come to call it, before steroids and Scott Boras, as if segregation and spitballs were somehow easier to cope with -- but the ones that exist have been granted immortal status, bestowed such honorifics as "shrine" and "church." One such place is Yankee Stadium, a "living monument" to baseball glory. And inside Yankee Stadium, there are few holies holier than the bleacher section, where if one closes his eyes, he (or she, as this is the modern age) can imagine a different time, a different purpose. This was where Jeffrey Maier stole the opening game of the 1996 ALCS from Tony Tarasco and the Baltimore Orioles. This was where Boston's longtime right fielder, Dwight Evans, defying the words of Robert De Niro's Jimmy Conway, "took shit." This was where Roger Maris, the former Kansas Citian, was booed by his own and, in his own words, was "drained of all my desire to play baseball" in his final years. The list goes on.

The incantation Friday night, completely atonal and said after the banging of a cowbell to an irregular beat, went like this: Yankees baseball. Mets suck. Royals suck. Teahen sucks. Boston sucks. Everything sucks.

In so many words, that about sums up the New York bleacher bum's life philosophy and worldview: full of contempt and self-pride rooted in that contempt.

My initiation was not harsh, but it came swiftly. Upon entering Section 39, my friend -- a Yankees fan -- and I walked across the front of the section, along the railing, in full view of the bleacherites. Within seconds, I heard a guy boo and say, "George Brett sucks." I got off easy. In the 2nd inning, a Red Sox fan walked in. There were two ways we could tell he was a Red Sox fan. The second way was from the Red Sox shirt the wore. The first way: the entire section rose and welcomed him as Roman plebeians welcomed Vercingetorix, the captured chieftain of Gaul: with taunts and vitriol. As he made his way up the aisle, it was like a scene ripped out of a WWE event, when a heel enters the crowd and the crowd parts for his passing, only to close in around him with their beer-drenched insults and middle fingers. The hatred felt overwrought -- intentionally, for dramatic effect -- though it was also much more carnal than that, as if an ancestral lodestone planted at birth and nourished through the years created some force field that made the carrier irrepressibly angry at the sight of Red Sox insignia. The cursing and booing, with an "asshole" chant (the irony didn't escape me, anyway), went on for minutes. It was as hate-filled a public lambasting as any mob could get away with in our enlightened times.

Welcome to the Bronx, indeed. 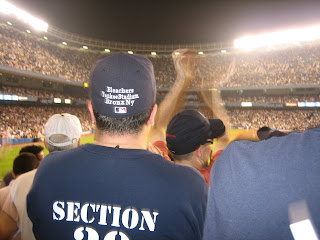 But there's something else to all this. Pope John Paul II has said, "A community needs a soul if it is to become a true home for human beings. You, people, must give it that soul." The bleacher section at Yankee Stadium does not lack soul, nor community. I don't mean for this to be a spiritual journey into the heart of a place many call baseball's cathedral -- one that, sadly, will be torn down after next season -- but "soul" is an apt word to define that quality that distinguishes Section 39 from, say, the Picnic Terrace at Petco Park. From the Hispanic man who bangs the cowbell to the 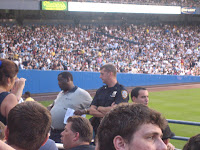 Caucasian frozen lemonade vendor who gets playfully jeered for sounding like the Aflac duck, there is a sense of kinship as unshakable as the concrete underneath our feet. Everyone plays a part. In the grand scheme of things, each person in the bleacher is as integral a thread in the Yankee fabric, connected as much with one another as the past, as the front office or the newspapermen upstairs or the statues in Monument Park. Even the ushers -- they are played by New York's finest -- though more detached than I, the outsider, seem complicit in this Yankee machination. 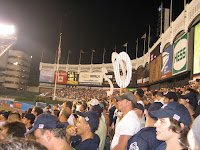 This section is the Mecca of Yankee Stadium. I've sat along the baselines and in the upper deck and the press box, but no experience quite so approximates what it's like to be a Yankee fan and a New Yorker -- no offense to Mets fans, but around the world, the Yankees are the first team of New York -- like sitting in the bleachers. No wonder Joe DiMaggio thanked the Lord for making him a Yankee, and Mickey Mantle said, "I never knew how someone who was dying could say he was the luckiest man in the world. But now I understand." No wonder Alex Rodriguez, who was cheered long, loud and hard, and genuinely, says he wants to retire as a Yankee. (Scintillas of light, like fireflies in the impressionist painting of night, lit up A-Rod's at-bats.) "We are the New York Yankees," George Steinbrenner is quoted as saying. From any other owner, this is ridiculous: of course you are, as opposed to the Cleveland Browns or 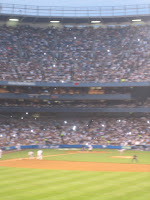 Toronto Argonauts. But to say one is a New York Yankee -- rather, of the Yankees, as if the Yankees were a beatified institution bigger than all of us -- is to be something more: it's to belong. Not just to a place or a club, but a part of history that extends further than any of our memories. It would be silly to call a team as reviled as the Yankees "America's team," but the Yankees are, unquestionably, part of Americana, what with their championships (more than any other professional sports team), legendary characters, myths and role in pop culture. It is about this team, after all, that Hemingway wrote, "Have faith in the Yankees, my son." Faith is not lacking in Section 39.

Don't get me wrong: they are not saints, not in this church nor any other. They are pompous and quite often rude, sometimes even downright boorish. But they are New York, which means you accept the braggadocio and bombast unconditionally, because New Yorkers have earned that right. 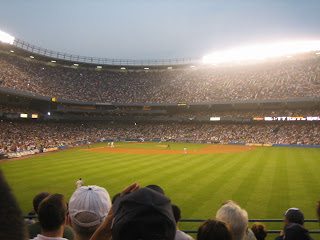 By dusk in Yankee Stadium, the home team had extended its lead to 3-1. This came after the 3rd inning, when Ross Gload tied the game with a single to center, prompting someone in our section to say, "I can't believe we're tied with the Royals," as if a mercy rule win should have been invoked by this point. The Yanks scored three more in the bottom of the 6th off Ryan Braun, though one of the runs was charged to Odalis Perez, making sure he'd leave with his typical four-run, five-inning performance that has come to both infuriate and amuse me. Royals manager Buddy Bell refused to pull Braun after the 6th, perhaps suspecting he'd need a fresh bullpen for the game the next day (which proved correct: he used six relievers on Saturday afternoon, who combined to give up 11 earned runs in five innings). It didn't matter though: the Royals' bats went cold, and there would be no comeback tonight.

Winds came in the 8th, sending debris swirling into the air. Thunder cracked above us, preceded by sky-fracturing lightning powerful enough to frighten away even some of the bleacherites. The Yanks scored another. In the 9th, as raindrops fell, Metallica's "Enter Sandman" sent what was left of the crowd into a frenzy. Now this was truly a scene ripped out of a graphic novel: fat goblets of rain falling out of a starless void and white hot blazes bristling forth to the heavy metal din of the executioner's entrance song. Jason Smith, Tony Pena Jr. and Joey Gathright had no chance. 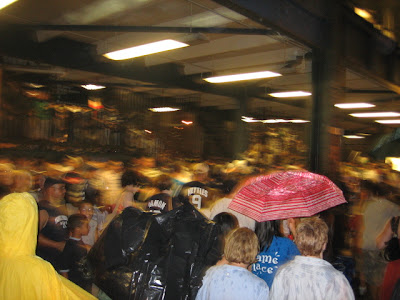 Afterwards we stepped out into the rain, shoulder to shoulder, and marched pitter-patter towards our common transportation. The D train waited, doors open, for us to board. Another adventure lay ahead, with drunk co-eds, crazy bastards and parents riding with their kids who wore Jeter jerseys. All together now, all races represented, all faces, all emotions, all facial upturns and pitches of laughter and mannerisms. All squished together, as only New York could concoct it, each searching for a place called home and a thing called soul.
Posted by The Tao at 10:32 AM