The White Sox defeated the Royals last night, taking the season series 12-6 and building a two-game lead for fourth place in the AL Central with three to play. That does not mean, however, they are a better team -- maybe just that they have a few high-paid stars, plus the hunkering Royal killer Jim Thome. Consider the secret sauce formula developed by the guys at Baseball Prospectus. It's their formula, so they can explain it, but just note: the Royals are ranked 10th in the Majors; the White Sox, 29th. Out of 30.

Also consider these definitions found in the Urban Dictionary under "White Sox."

Our Wrap writer this time is Troy Appel, who is -- yes, I'm about to blow his cover -- Rangers Fan, the same who hates Jarrod Saltalamacchia for marrying a hot high school teacher, doesn't believe in the man, the myth, the legend, Rowdy Hardy, and, like everyone else, is mesmerized by Zack Greinke. He currently lives around the Dallas/Fort Worth area and recently wrapped up a job with the Texas Rangers.

His connection to the White Sox? We're not really sure. Maybe those years he spent going to school in Chicago, or his hatred of bears, or, maybe, his hatred of the White Sox, shared by many (though he says he likes them). But really, we're not sure at all. 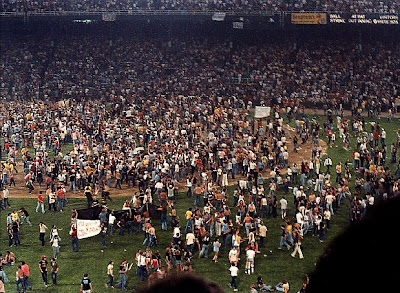 Contender to Pretender: the White Sox Guide to Losing 90+ Games

Note: This column is NOT approved by Ozzie Guillen. It has been edited for language and all offensive comments have been removed.

“I'm tired of seeing this [expletive] every day.”

Not the kind of words you want to hear from your manager. And he is not the only one.

From the penthouse to the outhouse in two years.

In 2005 the Chicago White Sox mixed strong pitching with clutch offense to dominate their way to a World Series ring.

Ozzie Guillen is a genius.

In 2007 the White Sox can’t hit, can’t pitch and can’t keep their manager from going off the deep end.

Oh, how things can change.

The hopes were high coming into 2007: an offense featuring Jim Thome, Paul Konerko and Jermaine Dye, four proven big league starting pitchers and a bullpen chock full of young power arms. The pieces were in place.

But not for long.

The offense was as cold as a Chicago winter – but the summer did heat the bats up at least!

Both good marks were/are good for last in the American League. But at least it went up!

The Sox offensive futility was a theme during the 2007 season, ranking last in the American League in runs, hits, doubles and on-base percentage.

You name the star, they had an off-year.

In 2005, the Sox made winning one-run games their specialty.

In 2007, scoring one run was a tall enough task most nights.

But with cold bats surely one could lean on a staff that would see Mark Buehrle throw a no-hitter and have Bobby Jenks set the Major League record for most consecutive retired batters with 41.

Buehrle, Jose Contreras, Jon Garland and Javier Vazquez. What more do you need? Add in rookie John Danks, acquired in a trade with Texas for one-time White Sox darling Brandon McCarthy, and you had a staff with big names and big potential

Three starters with rings and a fourth, in Vazquez, with endless potential surely could save a nonexistent offense. Add in Jenks and one would figure the Sox could eke out some tight wins.

General Manager Ken Williams apparently forgot that you can’t get to your closer if you can’t hold the lead in the seventh and eighth innings.

Aardsma, Bukvich, Day, Logan, MacDougal, Masset, Myers, Sisco, Thornton and Wassermann are some of the no-names that have tried their hand at setting up Jenks this season.

Success has been minimal.

Thanks to Kenny Williams, the Sox are now only an offense and pitching staff away from contending once again.

Ozzie said it best in one of his biweekly tirades: “People are blaming our pitching staff, but the offense comes along and puts more dirt on the grave. Everyone in that room should look in the mirror and be embarrassed.”

This team’s strength: That every player will finish the 2007 season alive and kicking. But not for a lack of trying on Guillen’s part.

Old outfielders, old infielders and the worst bullpen in baseball make for more problems than Jerry Reinsdorf would dare open his pocketbook to fix. So in 2008, except more of the same.

From geniuses to idiots. That’s the story of the White Sox.